For a while I thought I really had accepted living with chronic illness. And that is true but… I did not know there was so much more to accept.

In my <Dutch language> psychological selfhelp book ‘Ziekelijk Gelukkig’ (Happy in Sickness, red.) I wrote extendedly about accepting chronic illness and also about my own acceptation process. This process started when I was not able to go to work any longer due to Lupus inflammation in the Summer of 2006. At the time I was 28 and a book editor at a publishing house. In the Netherlands when you fall ill you’ll be registered for the ‘Sickness Law’ (which will cover the costs of your sickness for your boss for two years). Fighting the imflammation in my chest (Pericarditis and Pleuritis at the same time) took much longer than I thought and was a complicated route in which I eventually ended up in a lung rehabilitation centre for half a year, after two years of struggling to get better.

During this time, ten years after I fell ill with Lupus, I learned to deal with chronic illness for the first time. Before that, I had just ignored it. And while I immediately realised acceptation is a process, I thought I was done after 2 to 3 years of virtually having no life other than recovering. But it was just last year that I realised what I wrote about emotions in my book (they keep showing up again all trough your life) is also true about acceptation when you get into a new phase of your illness. And from experience you probably know a phase is just that: a phase, and it never stays the same for more than a couple of years.

During the years and in my work as a wellness inspirator I have encountered so many people that said they will never accept because accepting for them just sounds like: “I am okay with this” while really you are not. Personally I don’t think accepting chronic illness is ‘being ok with it’. For me it means that you just accept the fact that you’re chronically ill. It’s a fact, and you’re accepting that fact. Just that.

“Dealing with chronic illness can be quite an inconvenience in reaching your goals.”

When I had to talk to the company doctor in 2006 (this is common when you are in the ‘Sickness Law’) I first came to realise me being chronically ill as a fact. I had been at home for one and a half months at that time and it had been quite a difficult process so far. I kept trying to go to work and working half days which only resulted in more pain and inflammation. This doctor told me: “You have never accepted your illness. It’s time to face the facts.” I found this very confronting and I came home quite shocked. Also because I realised what I had been putting my body through when ignoring the Lupus.

That is now 12 years ago. In my book I wrote I found the accepting process different each day. But I had also found out that if I am in a bad period it gets easier to accept being ill after a while. After this: “It’s really bad right now”-acceptation I was good for a while. It didn’t get more difficult until my situation started to change again. A change in health often asks for a mental change as well.

“A change in health often asks for a mental change as well.”

By the time my book came out in 2010 I also became a parttime entrepeneur. And while it was just a couple of hours a week of me working as a freelance editor, my huge ‘wanting to prove I could do anything’, my goalmindedness and my huge sense of responsibility came into view again. I suddenly started to expect that if I could do so many things on one day, I should be able to do so much on the next day as well. And when money started coming in, I expected to keep this up regardless of my physical situation. On good days it suddenly seemed easier to push the fact of having a chronic illness away. I just started ignoring again. Goodbye acceptation! Dealing with a chronic illness can be quite an inconvenience in reaching your goals.

When the Lupus started to flare again, I would usually give in and start coming to terms with itagain, but when things were going better and I started getting hope of being able to work again and having a somewhat normal life, often after a few succesful weeks, the whole acceptation proces did not seem that important anymore. After a while I started to be annoyed with my constant change in perspective, and I made myself choose: “Either accept the Lupus once and for all (very good self care!) or don’t, but not just when it suits you.”

“Acceptance is more a fluid process than a given fact.”

At first, acceptation for me was accepting I live with a chronic illness. That was it: you focus your life around this and you go on. But accepting you have a chronic illness and accepting you have a totally different life because of this, are two different things. I forgot that accepting a chronic illness also means accepting you will have a totally different life from then on. And often it’s not the life you were dreaming about before you fell ill. I noticed that acceptance for me is a recurring theme. It will go hand in hand with good and bad periods but also with everything that comes with being chronically ill: what my life quality looks like at a certain pont, what I am doing with my life and what I am able to do in the future. Because this changes often, acceptance is therefore more a fluid process than a given fact. I didn’t know that 10 years ago. But we all get wiser when we get older, right? And maybe I just have to accept I will never really accept everything there is to accept fully. And that’s ok too.”

What do you think about this? I’d love to hear from you. Please leave a comment below. 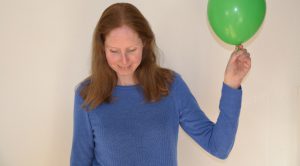